What is a Safe Harbor Match?

Ubiquity Retirement + Savings has been an affordable provider of retirement solutions, including Safe Harbor 401(k) plans, designed for small businesses, start-ups, and solopreneurs since 1999.

Customize a retirement plan for your small business in just a few clicks.

Sole Proprietor
I Have Employees

In exchange for getting a free pass on annual IRS testing, Safe Harbor plans require employers to make annual contributions on behalf of their employees.

Like any 401(k), these matching contributions are tax-deductible for employers.

A 401(k) is a type of retirement savings plan, typically sponsored by employers to attract and retain employees. One of the hallmarks of a 401(k) plan is that they allow individuals to contribute to their own retirement savings accounts, but also allow employers to match dollar-for-dollar or a certain percentage into employees’ accounts as an added bonus.

Matches are not required with Traditional 401(k)s, though most employers match 50 cents on the dollar up to 6% of employee pay or dollar-for-dollar up to 3%. Matching is mandatory with a Safe Harbor 401(k), but there are a few different options.

With a Safe Harbor Plan, the employer can choose to contribute in one of three ways:

You provide a mandatory match of 100% (dollar for dollar) on contributions of up to 4% (you can match up to 6%) of compensation contributed by employees.

You commit to a mandatory contribution of at least 3% of employee salaries to all who meet the plan’s eligibility rules, regardless of whether or not the employees themselves contribute to the plan.

So, for instance, if you offer a non-elective safe harbor plan, it’s easy to calculate your budget. If you offer a 3% non-elective contribution to 10 employees earning $60,000/year, you would contribute $18,000 ($60,000 x 10 x 3%). On the other hand, if you choose basic or enhanced matching, the total cost will depend upon what individual employees are contributing, so it’s harder to do the math – though often cheaper overall. 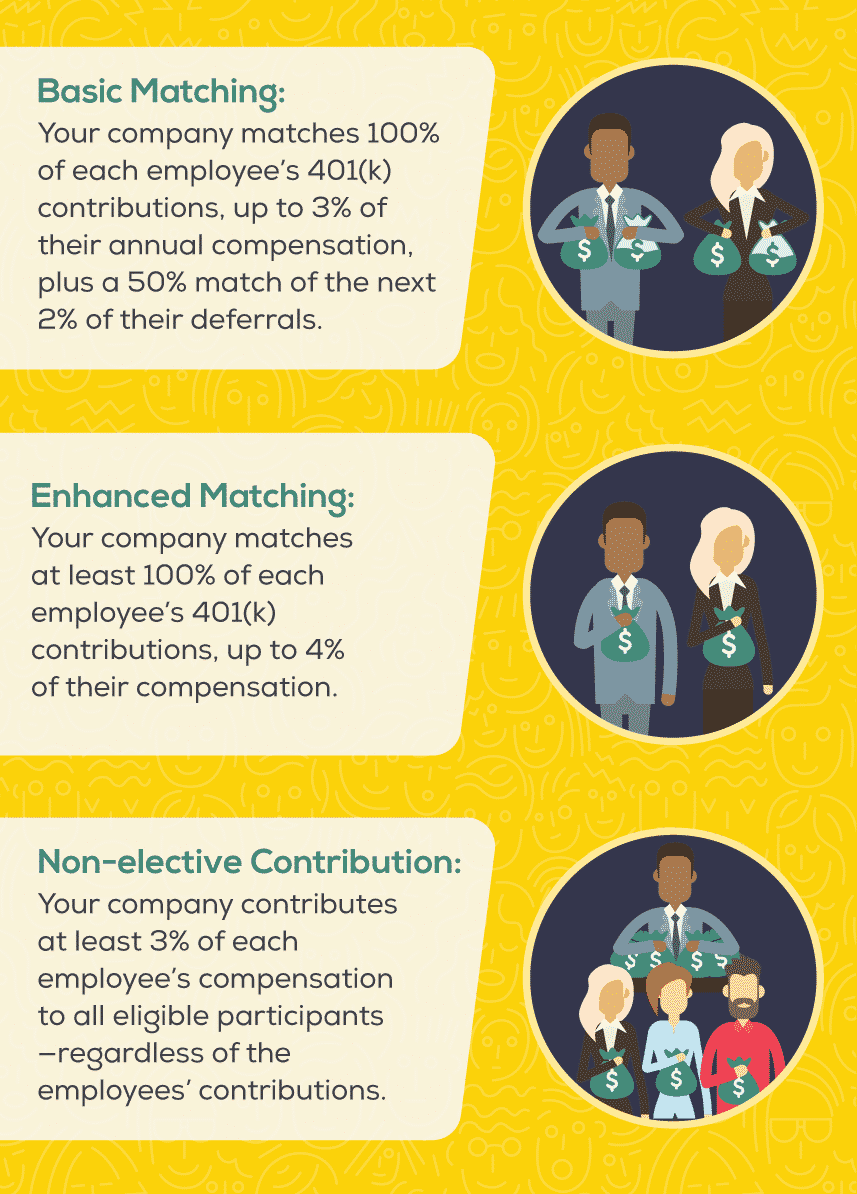 Tests You Can Avoid with a Safe Harbor 401(k)

Contributing to a 401(k) comes with significant tax advantages, so the Internal Revenue Service wants to make sure everyone in your plan is treated fairly, not just company owners and high earning executives. Therefore, most 401(k) plans face three annual nondiscrimination tests:

The ADP test limits the percentage of compensation that Highly Compensated Employees (HCEs: those earning $150,000+ or owning more than a 5% stake in the business) can defer into their 401(k) based on the average contribution rates of the non-highly paid employees.

Small business plans and those with low participation rates are most commonly impacted by this test. The ADP of all HCEs can be no more than 2 percentage points higher than other employees. To come into compliance, businesses must have a return of excess for HCEs or process a qualified non-elective contribution that brings the rest to a higher (passing) level. However, employee reimbursements will be subject to taxation, thus negating the advantage of contributing to a fund using pre-tax money.

The ACP test is similar to the ADP test but looks specifically at the employer contributions to ensure that the employer match is not disproportionately high for HCEs and stakeholders, compared to non-highly paid employees. To pass, employers must produce a ratio of the average HCE to NHCE contribution rate of no more than 125%. Employers can remedy a failure in the same way they’d rectify an ADP test result.

The top-heavy test ensures that key employees (owners, officers, etc.) cumulatively hold less than 60% of the total plan balance. Employers who fail this test must make a contribution to non-key employees of 3% to be non-discriminatory.

In the worst-case scenario, the IRS could slap your business with a 10% penalty fee on the excess contribution or even reject the entire 401(k) savings plan, triggering income tax owing on the entire amount.

Here’s the good news: most businesses do pass these tests. However, nearly half of businesses have to either refund money to employees or restrict plan contributions to do so. 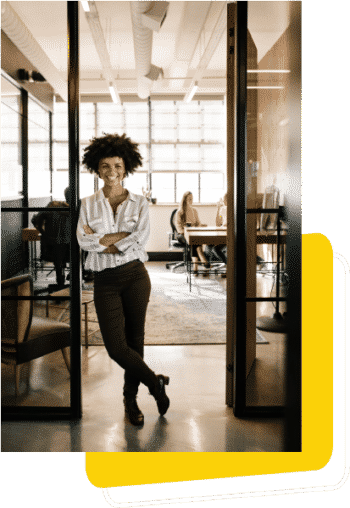 Is a Safe Harbor 401(k) Right for Your Business?

Depending on your employees’ salaries, the cash needed to fund the matching contributions for a Safe Harbor 401(k) may be higher overall than a traditional match. You’ll also lose some of the plan flexibility, as all employees must be 100% vested right away.

However, this solution could be well worth it if you want to avoid annual IRS testing. A Safe Harbor 401(k) is an attractive option if:

Safe Harbor 401(k) provisions allow business owners the freedom to maximize payments for themselves. Just a 3% contribution to all staff gives you the ability to save the maximum allowable for your retirement. A Safe Harbor 401(k) can suit your needs if you want to incentivize your Highly-Compensated Employees with generous profit-sharing contributions to retain your workforce and remain more competitive in your market’s labor pool.

Add a Safe Harbor Provision to Your Plan

When setting up new 401(k) plans, employers can claim a tax credit of up to $5,000 annually to help cover startup costs for the first three years. You may also add a Safe Harbor provision to an existing plan no later than November 15. Here at Ubiquity, we are happy to share 401(k) resources, help you administrate a new plan, add a plan amendment, and answer any questions you may have.

Ready to start offering a retirement plan for your employees?
Get Started

About Us Referral Program Careers Testimonials In the Media